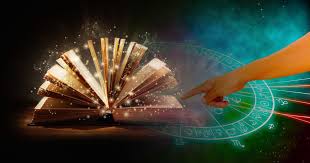 Sun is known to be the God of light. The sun is the star at the centre of our solar system, around which the earth and other planets revolve, and which provides us with heat and light. The portion of the sky (or arc) that the sun travels in every year, rising and setting in a slightly different place each day, is therefore in reality a reflection of the earth’s own orbit around the sun. This arc is larger the further north or south from the equator the latitude is, giving a more extreme difference in day and night and in the seasons during the year. The sun travels through the twelve signs of the zodiac on its annual journey, spending about a month in each. The sun’s position on a person’s birthday therefore determines what is usually called his or her sun-sign. It rules the sign leo.

The Moon rules the sign Cancer. It is the earth’s companion satellite, though some astronomers believe that it approaches being a planet in its own right. The Moon is large enough for its gravity to affect the Earth, stabilising its orbit and producing the flow of the tides. The Moon is familiar to us for its different phases, waxing and waning (krishna paksha & shukla paksha) in appearance in an unchanging cycle. The Moon orbits the earth in 28 days, spending a fleeting 2.33 days in each of the signs of the zodiac. When observed from the Earth and relative to a fixed point in space, the sidereal period is 27.3 days with minor variations. In order to give a figure in whole numbers for ease of astrological calculation the Lunar orbit can be aproximated to 27.75 days which then returns a period of 54 hours or 2.25 days for the Lunar transit of each sign.

The moon is associated with a person’s emotional make-up, unconscious habits, rhythms, memories and moods. It is also associated with the mother, maternal instincts or the urge to nurture, the home, and the past. It repersents Administration, Blood, Chest, Emotional Peace, Female Internal Reproductive Organs, Lymphatic System, Eye/Vision, Public Relations and Mother.

Mars rules the zodiac sign Aries and Scorpio. Its day is Tuesday. The colors are Maroon, red and sea-green. Mars rules the sex organs, bladder, muscular system, head, face, left ear, the sense of taste, blood poison, sexually transmitted diseases, haemorrhoids, burns, accidents, cuts, scalds, influenza, kidneys, inflammatory conditions. The diameter of Mars is roughly 4200 miles and it is smaller to earth. The temperature of the planet is said to be very low. It is being doubted whether existence of human life is possible there.

The cycle of Mars is similar to the Venus cycle, but rarely takes less than 6 weeks to travel through a sign and sometimes remaining for upto 6 months in one sign. The energy of Mars is vibrant and powerful and can easily override the energies of other planets especially in the case of men. Physical stamina, drive, aggression, and sexual needs all come under the rulership of Mars. Mars rules physical energy and efforts. It describes the strength and direction of the physical force that drives your ego, fires your emotions, and encourages your mental endeavors and communicative skills. It describes male relationships and associations, risk-taking inclinations, and the physical challenges you are likely to encounter.

Mercury rules the zodiac sign Gemini and Virgo. It circles the sun on the fastest orbit of any planet. Mercury takes only 88 days to orbit the sun, spending about 7.33 days in each sign of the zodiac. But in Geo-stationary system it takes average same as sun i.e one month in a sign. The cycle of Mercury is short but variable, taking anything between 15 and 70 days to travel through one cycle of the zodiac. The energy Mercury directs towards us is restless and tends to come in short, sharp bursts. It rules all forms of human communications and is strongly associated with the more basic levels of the mind.

Mercury indicates your mental outlook, intellectual endeavors, the way you think and communicate to the world outside. It represents ideas, methods, and information. It rules your hands and thus your manual dexterity and mechanical skills. Mercury also describes transportation. Mercury is the planet of intellect, speech, memory, education, short travels, virility, wisdom, intuitive power and occult sciences.

Mercury represents the principles of mentality, thinking patterns, rationality, transport, reasoning, and communication. it is considered an inconstant, vivacious, and curious planet that presides over the right leg.

Jupiter rules the zodiac signs Sagittarius and Pisces. The planet Jupiter is the king of the other planets, a giant in size with spectacular, brightly coloured clouds and intense storms. Astronomers believe that it plays an important protecting role in using its massive gravity to capture or expel from the solar system many comets and asteroids that would otherwise threaten Earth and the inner planets. Jupiter takes 11.9 years to orbit the sun, spending almost a year (361 days) in each sign of the zodiac.

Venus rules the zodiac signs Taurus and Libra. The calm, beautiful surface of white clouds that the planet Venus presents hides its hot, dense atmosphere and intense volcanic activity. Venus orbits the sun in 225 days, spending about 18.75 days in each sign of the zodiac.

Venus can be seen in the sky in the mornings and evenings before and after Sun set. It is the brightest of all the planets. The diameter is nearly 7,580 miles and it is slightly smaller than the Earth in size. Venus has no oxygen and has a dense atmosphere which obscures its surface features. Venus is also called as the Earth’s Twin Sister. The cycle of Venus is also variable like Mercury , sometimes taking as long as five months to traverse one sign of the zodiac cycle. But the energy of Venus is more balanced than Mercury. It projects slow, lingering, harmonious waves and is generally considered to govern everything that we esteem in life such as beauty, love and peace as well as relating to material values and earthly possessions.
Venus is associated with the principles of harmony, beauty, balance, and the urge to unite. It governs romantic relations, marriage and business partnerships.

Venus rules social attitudes and behavior, and aesthetic tastes and inclinations. It denotes female relationships and social interactions at every level. Venus indicates the values. It describes romance, marriage and other partnerships, capacity for humor, and the pursuit of pleasure. It is the planet of love and beauty, signifies harmony, union, life partner, vehicle, ornaments, sex appeal, business, happiness and well-being. Also signifies beauty, modesty, virtue, sincerity, artistic disposition, conjugal happiness, refined and polished nature. Relations with opposite sex, attraction, love, passions and generosity are also governed by Venus.

Saturn rules the zodiac signs Capricorn and Aquarius. It takes 29.5 years to orbit the sun, spending about 2.46 years in each sign of the zodiac. Saturn is associated with the principles of limitation, restrictions, boundaries, reality, crystallizing and structures. It concerns a person’s sense of duty and responsibility. Saturn is also considered to represent the part of a person concerned with long-term planning. The Return of Saturn is said to mark significant events in each person’s life. It is considered the greater malefic.

The Colors of Saturn are Indigo, Grey and Black. It rules, teeth, bones, spleen, right ear, sense of hearing, circulation, constipation, vitamin deficiency, fibrous tumors. Saturn is next to Jupiter in size. Its chemical composition is similar to that of Jupiter with a mixture of methane and ammonia gases. The planet is surrounded by three circular concentric rings. The diameter of the entire system is 1,71,000 miles. The rings will be seen in their maximum widths when Saturn is at the point in the constellations of Taurus and Gemini.

Saturn is a slow moving planet and takes two-and-a half years to traverse one sign and around 28 years to complete one cycle through the entire zodiac. Saturn’s energy is repressive and dense but ever-lasting. Saturn governs our karmic responsibilities and our capacity to learn about life in every part of life. It rules responsibilities, restrictions and limitations of life, and the lessons you must learn in life. It does not deny or diminish imagination, inspiration, spirituality, and good fortune but it does demand that these things be given structure and meaning. The mighty Saturn is more a friend than a foe. Saturn is an impartial hard task- master, serious and conservative. Signifies longevity, makes one careful, thoughtful, laborious, violent, envious, accumulator of wealth, prudent, contemplative, reserved, economical and patient. Its transit over the natal planets is of great importance.